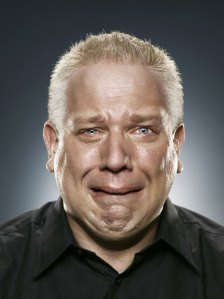 Glenn Beck is done? No Way! Now I don’t think it is a surprise that as a very Liberal person I’m not a Glenn Beck fan, but then I was never meant to be part of his fan base. The interesting thing here is I’ve long ago let his brand of craziness and attention getting fade into the background, like a child throwing a tantrum. The thing I didn’t consider was that his viewers would as well. Joanna Brooks offers a really great post about this.

As a Millennial and someone who lives and works online none of the major news networks can count me as a loyal viewer. I get my news through Minnesota Public Radio, twitter, blog feeds, facebook links, podcasts, emails from friends, and email newsletters. My home television is used to watch BluRays, Hulu Plus, and Netflix. We don’t pay for cable television but do pay for cable internet. I wonder how many of my peers and those younger than me are in a similar place?While I understand that the major news networks still hold incredible sway and have millions of viewers, for how much longer can will that be true?

I’m happy that my parent’s and grandparent’s generation won’t be bombarded with rants involving tear-streaked chalk boards. After I read of Beck’s potential departure I was surprised but elated, then I googled to see if other news sources were saying the same thing (here is a MSNBC article about his leaving and a hilarious Huffington Post piece with possible Beck replacements), finally I thought to myself: wait a minute… when was the last time I saw Glenn Beck that wasn’t on The Colbert Report or The Daily Show?

So at the end of the day my real take away from this news is how little it really impacts my daily life and how wonderful it is that those people in the world I disagree with on so much and I have a new commonality: neither of us cares what Glenn Beck has to say.

One thought on “No More Glenn Beck: Will Young People Even Notice?”